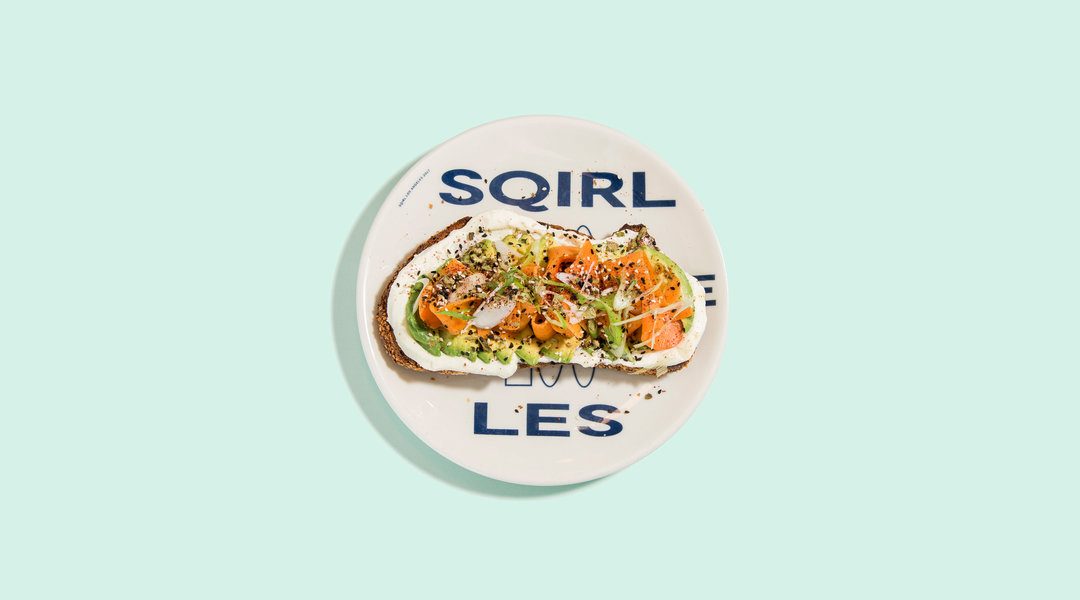 “Say what you will, but avocado toast isn’t going anywhere,” says Kacie Carter, the chef and co-owner of Honey Hi in Los Angeles of the dish that’s become nearly ubiquitous. “It’s up to us as chefs to figure out how to make the experience even more exciting and fun.” Here, eight elevated examples of the classic dish.

“There is a group of purists of avocado toast who would insist the paragon of the form would be toast, mashed avocado, chile flakes and lemon juice,” explains Kyle Glanville, co-founder of Go Get Em Tiger, which is said to have the country’s best iced latte. “Ours is not that.” Their toast includes half an avocado, sliced paper thin, on seeded sourdough bread that has been crisped in the panini press or griddled on the flat-top. It’s finished off with pickled shallots for acidity and homemade flaxseed cracker crumble for crunch.

“Avocado toast is a pure, direct, straightforward way to get that delicious thing into your face as quickly as possible,” says the Dinette chef James Seitz, who grew up in Bellflower, Calif., eating a version with a mayolike spread. At the Echo Park counter, however, Seitz keeps it chunky. Chopped avocados are loaded onto a slice of sourdough that’s been brushed with olive oil and grilled till caramelized. Requisite lemon juice and more olive oil are followed by cilantro, chervil, breakfast radishes, piment d’Espelette and Maldon sea salt.

How has avocado toast reached staple status? “It’s like toast with lots of butter, but healthy,” says chef Travis Lett of Gjelina Take Away in Venice. At GTA, slices of organic avocados are fanned out atop a slice of freshly baked whole wheat bread, and finished with julienned radish, cilantro and sesame seeds. It’s not unusual for it to sell out early — and often.

“The bread is simply a delicious delivery device for the healthy fats, vitamin E, antioxidants, phytonutrients and fiber found in avocados,” says Honey Hi’s chef and co-owner Kacie Carter, adding that the dish “can keep you fuller and satiated for longer.” Their health-forward toast — buckwheat sourdough brushed with olive oil — is piled high with avocados that have been mashed with lemon juice, parsley, sea salt and black pepper. For extra antioxidants, fiber, vitamin C and complex carbohydrates, they add sweet potato. Parsley, dill, beet-pickled onions, scallions, sumac and smoked paprika follow for flavor and depth.

“I resisted the avocado toast trend for a while,” says the Rose Cafe chef Jason Neroni. But after having a version at Bluestone Lane in New York City, he returned to Venice a changed man. “With the abundance of avocados and the fact we have a bakery in-house, it was a no-brainer.” Atop a slice of nutty, seeded country loaf, avocados are barely mashed before being topped with toasted Sicilian pistachios, pickled Fresno chiles and a duck egg — “for its dramatic appearance, unctuous yolk and extra silkiness.”

At home, chef Vinny Dotolo — who along with Jon Shook runs many of L.A.’s most beloved restaurants, including their original, Animal, and their latest, Jon & Vinny’s — smashes the avocado into whatever bread he has, and tops it with Japanese chile-garlic sauce, lemon juice and furikake seaweed. But at Jon & Vinny’s (where the toast, originally a breakfast item, was added to the lunch and dinner menus by popular demand), “it all comes down to the sources,” he says. The bread is from Gjusta, the avocados from JJ’s Lone Daughter Ranch or Sheen Farms and the olive oil is “really good.”

“It’s easy for me to say Los Angeles has an avocado toast game because we have really extremely delicious avocados,” says Jessica Koslow, the chef and owner of Sqirl in Silver Lake. To put her spin on avocado toast, the fruit is not chopped or mashed, but sliced paper thin and pressed between two sheets of parchment paper to create a bologna-like stand-in for lunch meat. Laid out on a slice of buttered, toasted sesame country boule, the avocado is dressed up with garlic crème fraîche, crunchy pickled carrots and house za’atar spice blend. “It’s about highlighting what’s at the market in a way that it can be appreciated. If I was in New York, I wouldn’t be making avocado toast.”