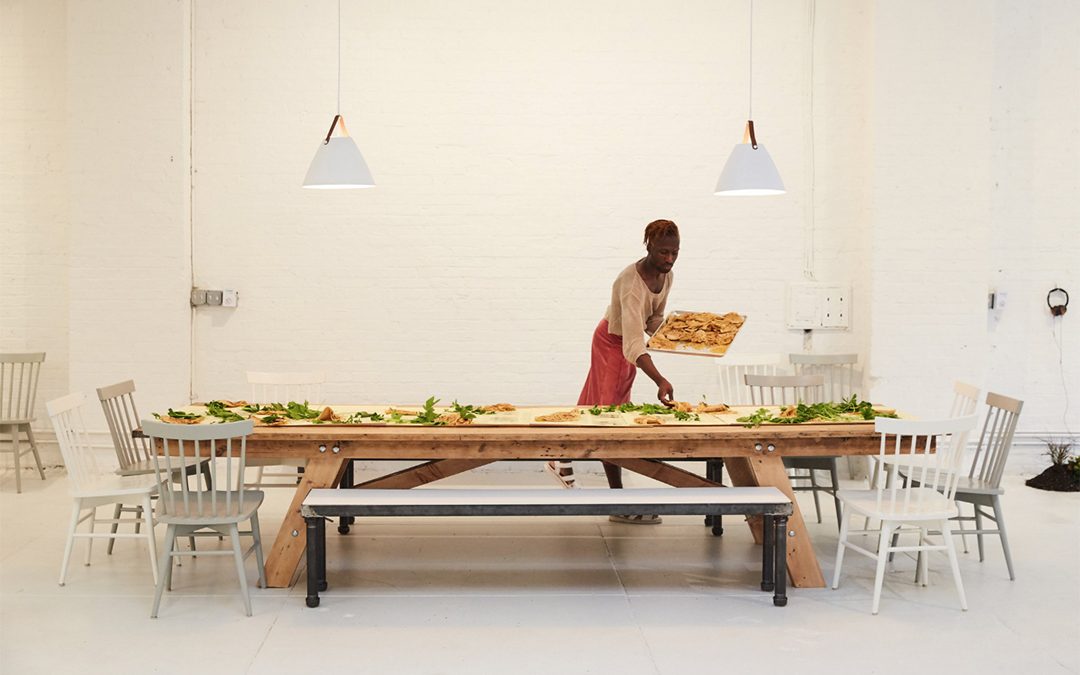 How to Throw a Dinner Party Like a Performance Artist

In 2012, as a Cooper Union sophomore, the artist and chef DeVonn Francis threw a dinner party for his classmates. He had recently become taken with a performance class taught by the artist Sharon Hayes and blended this fresh fascination with the culinary skills he picked up as a teenager cooking Jamaican dishes — jerk chicken, beef patties, escovitch fish — at MoDean’s Caribbean Restaurant, the fast food joint run by his father, Patrick Francis, in Norfolk, Virginia. At the student supper, Francis says, he had an epiphany: “Food can be performance.”

Last August, he launched Yardy NYC, an ethically minded food, media and event company that explores queer and migrant culture. On a recent Saturday night, he gathered artists, friends and family together for an intimate event at Rype Studios, in Williamsburg, for the second installment of HEY SIS!, a roving food and art project focused on healing and wellness in marginalized communities that Francis started in 2017. The dinner series, he explains, affirms his company’s ethos of food as a “vital anchor” for community building, justice work and healing.

As his guests mingled, Francis described how, as a child, he fell in love with Jamaican recipes while cooking with his mother and aunts. “First and foremost, Yardy is me acknowledging my history,” he says. The company’s name derives from the word “yaadie,” a patois term of endearment that means a Jamaican-born citizen — Francis is a first-generation queer Jamaican-American — and symbolically, the name represents “finding your way back home, a sense of belonging, loving who you are and helping others get to where they need to go,” he says. He has also explored these themes in performances at MoMA PS1 and the Bushwick art bar Secret Project Robot.

With his meals, Francis stages what he calls “the theater of a dinner table,” using his gatherings as opportunities to discuss sexuality, race and immigration. Lining the long wooden table at the HEY SIS! dinner were yellow paper place mats that doubled as Yardy Yardy Yardy, a one-off newspaper Francis created for the evening. It featured the event’s menu — escovitch carrots, jicama spears, yellow rice, pepper shrimp and a squid ink aïoli — and articles about Jamaica’s cuisine and politics. One page included two images of his mother, young, stylish and carefree, nearly a decade after she arrived in New York City from Jamaica in the 1970s. Another article outlined the party’s mission: to celebrate “the power of sisterhood, community and Caribbeanism.” While you might not be able to surround your own dining table with sound installations, much of Francis’s entertaining philosophy is easy to try at home. Here, he shares his tips for making meals that emphasize heritage and experimentation.

Make It a Family Affair

Francis likes all of his events to feel cozy. With his sister, Monique Francis, heating West Indian flatbread known as dhalpuri roti on a nearby stove, and his parents talking to guests, a Francis dinner party is not only served family style, it is a true family affair. “I always love to support him,” says his older sister, who lives in Virginia. “One of the recurring comments I get from people who come to my dinners, no matter where I host them, is that they feel like they’ve been invited to my home for dinner,” he adds.

Don’t Be Afraid of Seafood

“Seafood is fun,” says Francis, who prepared pepper shrimp in tiny plastic bags — an ode to how seafood is sometimes served on the street in New Orleans — and poached octopus. “A lot of people are really intimidated by things like octopus because the texture is so delicate, but they are really interesting protein choices that remind me of what my mother made growing up and reflect the spirit of living on an island.” Francis also notes that a secret ingredient in almost every dish is coconut milk. “It’s great for savory and sweet dishes,” he says. “I used it in the coconut cake and in the turmeric rice.”

No Utensils? No Problem!

“Oh, you are probably like Where are the spoons? Where are the forks? That’s not happening tonight!” Francis said teasingly to his 34 guests. He likes to serve his feasts directly onto his custom place mats, with the expectation that his guests will dig in with their hands. He believes it creates a more engaging dining experience. “I want you to really get into what an un-skinned banana looks like when you’re able to open it up,” he says. “There’s something about the process and I don’t want to cut it out in the offering of a dish.”

Adorn the Walls With Art

For the event, Francis created artworks as an ode to the women who raised him. In the bathroom, guests were greeted with a shrine-like installation featuring a large photograph of the artist’s mother, taken in the early 1980s, illuminated by candles. “When I look at these photos of my mom, I see play, I see someone who’s coming to a foreign place, stepping into this sense of self, confidence and wholeness,” he says.Additionally, guests were treated to six sound pieces, which sprouted out of un-potted tropical plants that lined the room’s exposed brick walls. They featured interviews that Francis had conducted with his grandmother, mother and aunts, in which they trade recipes and insights into Jamaican culture.

Francis favors highlighting not just his talents but also the creative gifts of his community. “I don’t even know how many sisters I have at this point in my life but she is up there really high,” he said, introducing the Jamaican-born, Brooklyn-based musician Tara-Jo Tashna to the crowd. Seated before a white backdrop and surrounded by an array of plants, Tashna shared a selection of soulful, experimental R&B tracks. “She’s amazing,” said Francis, “I am so happy y’all get to experience how wonderful she is.” After the performance, guests danced to a playlist of reggae and dancehall, two sounds Jamaica has exported internationally.

At the end of the evening, Francis addressed his guests as they sipped his exceptional Carrot Punch — a blend of carrot juice, turmeric, ginger, coconut milk and white rum. “Spending time with people in this room, the one thing you want to walk away with is… the recipe to that carrot drink,” he deadpanned as the guests broke out laughing. But really, he continued, the event was a celebration of community and difference, and “the real thing you should walk away with is it’s totally amazing and awesome to be yourself.” Signaling toward his freshly dyed sandy blonde locks, he added, “That’s why I have this new hair!”

The article appeared first in nytimes.com.