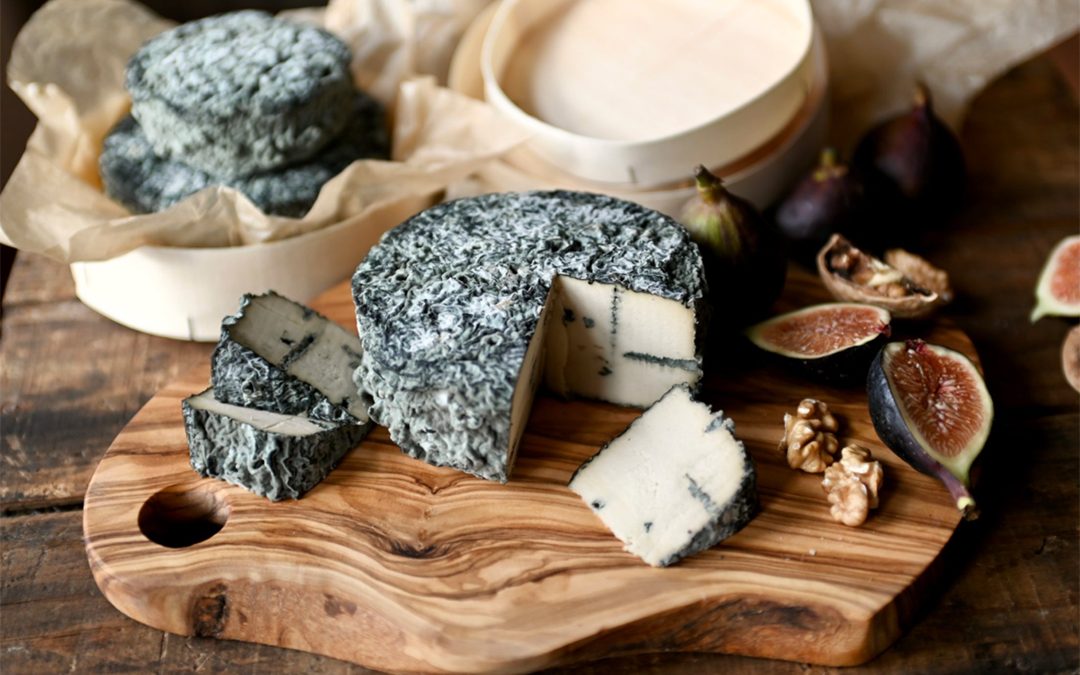 Cheesemakers are pushing the boundaries of cultured, plant-based milks, producing more compelling vegan cheeses than ever before.

The Barn Cat, a vegan cheese made by Stephen Babaki of Conscious Cultures Creamery, is part of a new wave of bloomy-rind vegan cheeses.Steve Legato for The New York Times

The pleasures of a bloomy-rind cheese begin before you slice into it — the softly wrinkled wheel, dappled and dimpled like the face of the moon. The promising stink, getting stronger by the minute.

But I considered the velvety rind of a two-pound Barn Cat with more than a glint of skepticism. This cheese was made of cashews and coconut, run through with a dark line of vegetable ash, and I doubted these ingredients could undergo any kind of meaningful transformation.

I was wrong. I was unprepared for the mellow, pleasingly dank flavors of a soft-ripened goat cheese, for the mildly peppery tang, for the dense, luxurious creaminess.

When I was a vegetarian, in college, cheese was the final boss for everyone I knew considering veganism, the last and most difficult food to relinquish. And it seemed no one could win — cheese made from milk was too powerfully delicious, and the vegan cheeses available in specialty stores were bland, pale simulacra.

In the last few years, as the national demand for vegan foods has increased, the vegan cheese industry has boomed. Competition is fierce, and the best slices, shreds and other mass-produced vegan cheeses are nothing like the disappointing, often repulsive, starchy goop that I remember from the early 2000s.

This newer generation of packaged cheese is more convincing, in part, because it’s produced in roughly the same way as dairy cheeses, made from cultured plant-based milks that develop texture and flavor through fermentation, rather than solely through additives.

On a much smaller scale, specialty cheesemakers like Blue Heron Creamery in Vancouver, British Columbia; the Herbivorous Butcher in Minneapolis; and Vtopian Artisan Cheeses, in Portland, Ore., are pushing the limits of those fermentations to create vegan cheeses with flavors and textures I’d previously thought impossible.

To make that ashy-centered Barn Cat, Stephen Babaki of Conscious Cultures Creamery, in Philadelphia, inoculates the surface with various strains of Penicillium candidum, typically used to ripen Camembert and Brie, then ages it for two to three weeks.

“You can’t fake time,” Mr. Babaki said. “And if you don’t give cheese time, it can’t develop flavor.”Stephen Babaki, who runs Conscious Cultures Creamery, started out making vegan cheese in a yoga studio, before graduating to his own production site.Steve Legato for The New York Times

Using cashews, Mr. Babaki has made a vegan blue cheese and aged it for three months. He has soaked whole wheels in kimchi brine, and washed other cheeses with wine. His most popular vegan cheese, the Maverick, is a downy, cream-colored puck with a sharp flavor and a persuasively buttery texture.

The cheese is probably at its peak at around six weeks old. But Mr. Babaki knows some customers who like to age it at home for three months, and sometimes even longer. “It gets …,” he said, pausing, “really funky.”

Mr. Babaki once let a cheese ripen for 15 months and found that its rind turned a pinkish hue, letting off a mild whiff of ammonia, much like a sweaty dairy cheese just past its prime.

Inside, it had the nutty flavor of an aged Gouda, along with a matrix of tiny crystals typically found in long-aged, hard milk cheeses. The cheese needed work, but Mr. Babaki took it as an encouraging sign of the possibilities still ahead.

Trial and error seems to be the unofficial credo of most vegan cheesemakers, and to an extent, it has to be.

The preservation of dairy is ancient and well-documented, with established techniques for curdling the milk, as well as shaping and ripening the curds — early versions of brine-cured feta go back about 5,000 years to Central Asia and the Middle East. But vegan cheeses are comparatively young and highly experimental, evolving rapidly year over year.One of Mr. Babaki’s most popular cheeses is the Maverick, made from cashews and coconut.Steve Legato for The New York Times

“The cheeses from the early 2000s and the cheeses today, you can’t even compare them anymore,” said Michaela Grob, the owner of the Manhattan vegan cheese shop Riverdel, in Essex Market.

Her shop has been open for five years, and even in that short time, Ms. Grob says she has seen the range and quality of vegan cheeses grow exponentially, with a recent swell of blue-veined and Brie-like cheeses.

Ms. Grob, who also makes her own cheese for the shop, attributes this creativity to the availability of more and more vegan cultures — the same microbes used to make dairy cheeses and transform the flavors of milk, grown in a vegan environment.

“Think of it this way,” she said, “Cow milk doesn’t taste of Gouda — you’re using a certain culture that gives you that Gouda flavor.” Those cultures might work completely differently on a plant-based milk, but until recently, it was impossible for most vegan cheesemakers to even have a go. The culture houses that sell strains to cheesemakers couldn’t be bothered to grow vegan versions.

Ms. Schinner, who researched her book by taking cheesemaking classes and studying the ways traditional cheeses were made, then experimented at home in San Anselmo, Calif., giving her children tastes of her vegan concoctions when they got home from school.Miyoko Schinner influenced a generation of vegan cheesemakers, and now runs Miyoko’s Creamery in Northern California.Chloe Aftel for The New York Times

The book was a hit, though Ms. Schinner quickly learned that most readers wanted to buy their nondairy products already prepared, not make them from scratch. The same year she released the book, she opened an alternative dairy business called Miyoko’s Creamery.

Though Ms. Schinner is not without large-scale competition, she was a pioneer when it came to culturing plant-based milks, and her cheeses still carry a certain cachet among cooks.

“Her products are pretty untouchable,” said Brooks Headley, the chef and owner of Superiority Burger, in New York City. “When we mess around with new recipes for nondairy creams and yogurts and ricotta, we often reach the consensus among staff, ‘Well, it’s pretty good, but it’s no Miyoko’s.’”

Ms. Schinner influenced a generation of cheesemakers, but less than a decade ago, when she called culture houses to source vegan cheese cultures, she couldn’t get anyone to take her seriously.

“Because who was I? Just some crazy vegan cheesemaker,” she said. That changed as it became clear that vegan cheese was a growing market. “Culture houses want to work with you when you’re sizable enough that they can smell the business,” she said.

Today, there are culture houses all over the world selling vegan cultures. Some can produce buttery notes, peppery qualities, stretchiness and more. Ms. Schinner estimates there are about 30 cultures in her library, pelletized or freeze dried, and stored in the freezer.

Like Ms. Schinner, Aaron Bullock and Ian Martin of Misha’s Kind Foodsexperiment with vegan cultures and work with their own proprietary cultures, which they guard closely.

“As Black men, we belong to one of the groups affected most by a bad diet,” Mr. Bullock said, when I asked why they started a new vegan business in South Los Angeles.

The company, which started out selling an alternative cream cheese made of cultured cashew milk at farmers’ markets in Los Angeles, now employs a team of 20, and plans to convert more omnivores to eating vegan cheeses.

In her first trials, several years ago, Ms. Vallejo looked at the Miyoko’s Creamery labels for ideas about which ingredients to reach for, making substitutions when she had to, learning as she went.

“I started with soy milk, but moved on to cashews,” she said. “I looked at some independent companies that sell different enzymes for culturing Camembert or Brie, and I also inoculated with store-bought yogurt.”

Ms. Vallejo found that tapioca starch added a little elasticity and gooeyness to her quesillo, and that agar added body when it gelled. The cheese, once she perfected it, became a standard, highly demanded item on her menu, and her “moneymaker.”

“To be able to create regional dishes with these cheeses, to have a tortilla harina with quesillo, that’s a really big deal,” she said.

Kirsten Maitland and Fred Zwar opened their vegan deli and wine store Rebel Cheese in Austin, Texas, just a few months before the pandemic hit. And like Ms. Vallejo, they work to recreate specific cultural touchstones for their customers — vegan versions of Parmesan, Brie, mozzarella, Gruyère and pepper Jack.The amber cheeses are Kirsten Maitland and Fred Zwar’s Chebrie, a vegan Cheddar-Brie hybrid; at left and right, their truffle Brie, and at center, plain vegan Brie.Jessica Attie for The New York Times

Their Chebrie is harder to categorize. It’s marketed as a Cheddar-Brie hybrid, which would, I think, be a little monstrous if it were made of milk. Cut into the healthy, fuzzy white rind, and it reveals a baby-food orange interior that’s sharp and creamy, holding its shape but just soft enough to spread. It’s delicious.

When I sliced the Chebrie to taste with some crackers, along with a glass of cold, bubbly wine, I found that the language of dairy, the universe of familiar cheeses I knew, wasn’t enough. I needed new words, new categories, new reference points.

Was it really helpful to think about this tasty little cheese as a Cheddar-Brie hybrid, or was that limiting my appreciation of it? It wasn’t either of those cheeses, not really, but the original product of Ms. Maitland’s relentless experimentation with culturing plant-based milks — in this case, cashew, soy and coconut.

Like some of the most exciting cheeses in this new, experimental wave, it wasn’t a flawless replica of something familiar. It was its own curious, delightful new thing.

The article was adapted from the NYTimes.