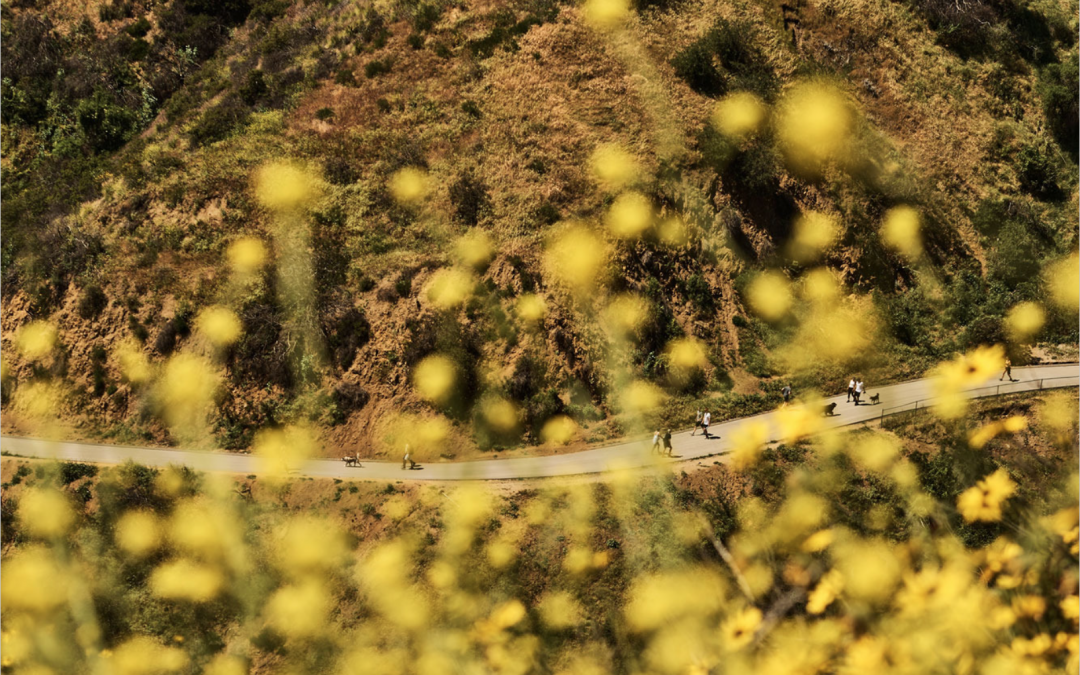 Inner peace with a side of abs, no beliefs required.

On a sweaty Sunday morning in Los Angeles, two dozen sexy people are laying out, starfish-style, on the concrete platform at the base of Runyon Canyon. Their eyes are closed, and they are breathing in through their noses and out through their mouths as fast as they can — ee–pah, ee-pah, ee-pah — while a 31-year-old musician with a tattoo of a rose on his forehead guides them to a higher plane of … something.

“Keep breathing,” he says, in a cool rasp, while the women push out their small bellies wrapped in leggings and the men flex their bare feet. “If you are concerned with how you sound or how you look, I don’t care. And no one else does, either.” The man guiding the group is Bryan Ellis. He’s directing the “breathing and qigong-ish, meditative shit” portion of the weekly meeting of the Wildfire Initiative.

The Wildfire Initiative is not a workout class, exactly; it’s a club for like-minded health enthusiasts, the latest “wellness collective” to hit the West Coast. Each Sunday, devoted followers join Ellis and his three co-founders — a quadrumvirate of enthusiastic bros — for kundalini-inspired breathing, hiking, and Instagramming. Over the last few months, the Wildfire has spread throughout Hollywood: Jesse Metcalfe is a regular participant, and Russell Simmons, who recently opened the Tantris Center for Yogic Science in West Hollywood, wants to collaborate with the guys. Today, several models, actors, and one Olympian (sprinter Leroy Dixon) have come to network with each other and get high on life. Hipster party legend Cobrasnake is here, too.

The participants lie supine in a circle around the concrete platform, while the founders walk around shirtless, their carved-from-stone pectoral muscles glistening in the mid-morning sun. Confused tourists and curious locals survey the spectacle from the trail above, while Ellis, a suave brunette in loose shorts, motivates the disciples with his own unique aphorisms. “The root word of emotion is motion,” he says, “and that shit’s going to keep you going if you allow it to.” He is the closest thing the Wildfire has to a leader; the other founding members call him the “Glue-ru.”

They all have names for each other like that. Crosby Tailor, a 32-year-old model/actor/chef who bakes ketogenic “fat burning” desserts for the likes of Gigi Hadid and Matt Bomer, is the “Commander-in-Chef.” Abraham Wolke, 23, is the “Jackass of All Trades,” because he runs the business side of things: the website, the email list.

And then there’s Netic Rebel, a self-styled philosopher who goes by “Opti-mystic Prime.” When we chat, he delivers extended declamations about the nature of man, citing everything from Nassim Taleb’s Incerto series to the Dao De Jing. He does not like to say his age, which is 38. “It’s one of those weird things where … there’s a categorical idea that once you’re at a certain age you’re supposed to be at a certain place,” he explains. “I think that’s really, really detrimental to development.” When I email him later to ask his given name, he says “Netic Rebel” was given to him “by the people,” and further clarifies his position on basic biographical questions. “Inquiries about Names & Ages are questions of boxes and frameworks for judgement more so than curiosity,” he writes. “They aren’t as useful as we make them out to be, it’s just part of the hyper-normalization of noncritical thought. Many people call me many things, I hope most call me helpful.”

Together, the guys are committed to inspiring fellow wellness enthusiasts. With the Wildfire Initiative, they have created a recreational association for the kind of 20- and 30-somethings who drink matcha in the morning and hit infrared saunas in the afternoon.

The guys have a fanatic interest in trendy health practices, but the Wildfire’s vibe is decidedly different from that of the restrictive cult juicery Moon Juice or the prohibitively expensive Goop. The Wildfire is not prescriptive. The Wildfire rejects dogmas. The Wildfire does not want all your money. (The weekly meetups are free to attend; occasionally, the bros host pay-to-play workshops at hip yoga studios like Bandier and Alo.)

Most importantly, the Wildfire does not care what you did on the weekend, so long as you show up Sunday morning ready to feel a little bit better. In an Instagram post advertising a recent meeting, Ellis wrote, “As per the usual we’re here to experiment with the unusual. Breathing, relieving, resetting, letting go, exploring our discomforts … Or … you can just be quiet and keep to yourself and learn to get high on your breath. Or detox your hangover. It’s all ok. We love you and we just want you to feel as good as we do. No beliefs required.”

The day before my first Wildfire experience, I meet Tailor, Wolke, and Rebel at Erewhon, a celebrity-friendly natural market and the Wildfire’s choice hangout spot. No one is eating or drinking anything, however: Wolke is fasting, Tailor just got done with a workout, and Rebel does not eat much in general. Still, it is nice to know that tonics and rice cakes are just inside, should we need them.

The Wildfire Initiative, the guys tell me, is a little bit about getting back to the earth, and a little bit about exploring new wellness trends together, and a lot about self- awareness. Together, the guys find this self-awareness by challenging themselves to get uncomfortable: The breathing, for example, is a difficult practice, but it helps everyone grow. Wolke explains the value of the Wildfire way with a parable about fruit.

Think of a “big giant apple that’s bred to just be palatable,” he says. “That’s the easiest life ever. This apple has no struggles. They’re spraying it with chemicals; it doesn’t have to do anything. So this apple is just sugar, right? But look at like, a crab apple. A crab apple is so much more nutrient dense, it has so much more to it, because of the elements and things —”

“Because of the fight,” Tailor adds.

Wearing various interpretations of Cali-inflected athleisure, the guys wax rhapsodic about their beliefs for over an hour. Somehow — perhaps unwittingly — they have built a business out of this: hanging out and talking about health. Besides Ellis, none of them have formal training in fitness or dietetics. Most are sustained by creative careers, like Tailor, who acts, and Rebel and Ellis, who sing. Tailor explains that acting is the day job that supports his passion for wellness. “I’ve had commercials keep me afloat for a whole year, so that’s something that I’m never going to give up,” he says. “I have to have that. That gives me the fun free time to do these things and to be able to wake up in the morning and go, ‘Oh, I’m going to make a tonic, get back to some emails, write a little diet plan, and go on a run.’”

For the most part, the guys found each other through Instagram, where they provide daily health tips to a combined 104,000 followers. About six months ago, they decided to start formally meeting at Runyon once a week, in order to offer their followers IRL guidance and conversation. “The Wildfire Initiative is a playground for transformation,” the official website reads. “It’s an open experiment in individual + collective consciousness, where we have the opportunity to learn time-tested tools and techniques for dramatically improving our quality of life. This is where we play. This is where we meet. This is where we learn to ignite the fire within — burning up all that limits us — and destroying who we are to discover what we could be.”

Instagram has remained a major part of the business. The guys have partnered with several wellness brands like Erewhon, GT’s Kombucha, and a cannabidiol company called Jambo. At Sunday’s meetup, a representative from Jambo hangs out, offering participants samples of the company’s minty-flavored CBD breath sprays. CBD is a non-psychoactive chemical found in marijuana that people have started using to treat pain and anxiety, and it’s amazing, according to Tailor: “Your inflammation drops, your circulation picks up. It kills like, bad cells.”

The next frontier, the guys agree, is to organize wellness retreats. “The retreats are important to me because I want to have condensed, intense periods of time with people where we can really explore,” Ellis says. “My whole goal is to really bring people a toolbox of things that they can dip into. What works for you: take it, use it. What doesn’t: tell us to fuck off.” The important thing, he says, is that you remain true to yourself. He has a script tattoo on his left forearm: esse quam videri. That’s Latin for “to be rather than appear to be.”

As the Wildfire burns far and wide, the founders are committed to keeping the growth organic. “It is business in the capacity that there’s money exchanged or value exchanged, but it’s not like a business in the capacity that we’re sitting down and making org charts,” Wolke says. “It’s very fluid, it’s very grassroots, it’s very natural … As soon as we start pushing it in one direction it’s going to get compromised, and we’re not interested in compromising it because it is us and we’re not interested in compromising ourselves in any way.”

At the Runyon Canyon meetup, the breathing exercises are coming to a close. The crowd, now ecstatically lightheaded, stands up to get ready for the hike, where followers and founders will chat and test out those CBD sprays. Before everyone starts walking, though, Ellis cedes the floor to Rebel, who leads the group in a gratitude practice, based on the Polynesian ohana.

The people lift their arms to the sun. Rebel assures the crowd that this is just something he likes to do, and you don’t need to believe in anything to do it. Everyone nods and starts chanting along with him, as they spin around: Thank you. I’m sorry. Forgive me. I love you.

They say it right to the sun, two more times: Thank you. I’m sorry. Forgive me. I love you.

“I love you all!” Rebel yells.

Then the congregation climbs up to the top of the mountain to take a group photo for Instagram.