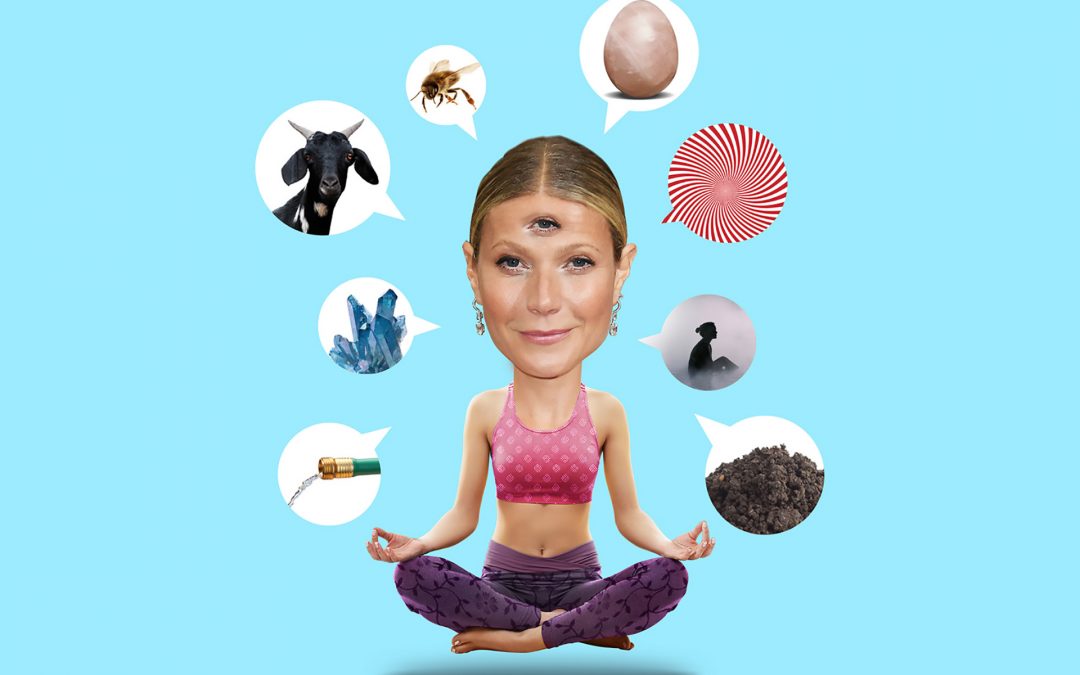 From recommending healing stickers to sex bark to the notorious jade yoni eggs.

Goop: a four-letter word if we’ve ever heard one. What began nearly ten years ago as actress Gwyneth Paltrow’s weekly newsletter of various rich-people frivolities has morphed into a full-fledged lifestyle and “wellness” empire, doling out dubious health advice, selling $15,000 vibrators, and generally enraging scientists and people who aren’t a part of the one percent. Most recently, the watchdog group Truth in Advertising filed a formal complaint asking regulators to look into the company. But Goop never wavers from its mission. Here, we’ve rounded up some of the most absurd and memorable Goop moments over the years. And hey, at least Paltrow admitted that she doesn’t know what she’s talking about, either.

“My New Year’s resolution is to learn how to meditate. It’s always sounded like something I should do, but I don’t know how to. My friends who do it say it’s really freakin’ brilliant. They say you can’t know the peace/awareness/contentment until you do it.”

Is meditation itself ridiculous? No. But this represents one of Goop’s first forays into New Age thinking — were we ever so young? — and we all know where that eventually led them.

22. That time they tried to rebrand bra-burning as a “cleansing ritual” meant to get rid of bad energy from your ex-boyfriends.

“Here, Galland shares her empowering lingerie manifesto and a bra-burning cleansing ritual (take note: there’s a full moon coming at the end of the month).”

Not recommended if you don’t want to create an obvious fire hazard and also have to spend a ton of money on new lingerie.

“This quick and potent chocolate recipe is perfect for a sweet bite after a romantic dinner. Ho shou wu is an herb tonic used for centuries to enhance youthfulness, reproductive function, and sex drive and Moon Juice’s Sex Dust is an aphrodisiac warming potion promoting enjoyable sex and fertility for both men and women.”

Amanda Chantal Bacon and Goop: a match made in woo-woo heaven.

20. That time they breezily talked colonics.

“For the uninitiated, a colonic is essentially a way to hydrate and irrigate your colon — a section of your intestines that’s approximately five feet long — by filling it with warm water and then flushing it out repeatedly.”

This is merely a stop in the wellness industry’s never-ending quest to try to make colonics sound chic.

19. That time they wrote an ayahuasca explainer.

“The ancient Amazonian concoction (ayahuasca and another plant are cooked together in water) is serious stuff, however, with a serious history: Shamans in the Amazon have been drinking it for centuries to tap into the spirit world; the intensely hallucinogenic visions and journeys of altered consciousness it induces have transformed lives, healed psychic wounds, and, some historians believe, altered history.”

Because of course they did. Would still be into hearing about Gwyneth Paltrow tripping balls though.

18. That time they gushed about how much they love cleanses.

“It’s pretty well-established that we love a good cleanse.”

Goop tried to get everyone onboard with soup cleansing, but speaking as someone who has been around the cleanse block a few times, nobody — nobody — loves a cleanse.

17. That time they made dumplings out of cabbage leaves.

“GP was really craving some clean dim sum, so she thought of using cabbage leaves as wrappers instead of wheat- or grain-based dough. Now we’re obsessed with this clean dumpling hack.”

These cleanse-approved dumplings actually don’t look bad, but “clean dumpling hack” is a phrase that, when uttered out loud, is an abomination to both God and man.

16. That time they really, really doubled down on their claims.

“As goop has grown, so has the attention we receive. We consistently find ourselves to be of interest to many — and for that, we are grateful — but we also find that there are third parties who critique goop to leverage that interest and bring attention to themselves.”

Thus begins a 2,500-word aggressive diatribe against Goop’s critics — in particular, Dr. Jen Gunter, with whom they seem to take issue mostly because she uses “F-bombs.” And to think, this is only the first in what they promise will be a series.

15. That time they consulted a “shamanic energy medicine practitioner.”

“When she isn’t conducting crystal readings, shamanic energy medicine practitioner Colleen McCann is clearing houses, apartments, offices of negative/stuck/unwanted energy, and helping her clients to detox energy that they can’t seem to shake off otherwise.”

The shaman in question is a woman named Colleen who used to be a fashion stylist and splits her time between New York and L.A.

14. That time they published a guide to spirit animals … along with their own $2,400 spirit-animal rings.

“In certain cultures and spiritual systems, there is a belief that we each travel with a cadre of spirit guides, which also includes animals. Shamanic healer and intuitive, Colleen McCann, explains below what spirit animals are, and how they can be harnessed for help in life, whether through meditation or totem form. In regards to the latter, we collaborated with the exceptionally talented jeweler, Kim Dunham, on a small collection of hand-engraved spirit animal signet rings, which can be customized with inscriptions inside to make them extra-special.”

In which they consult shaman Colleen on another culture’s spiritual beliefs, then go ahead and sell pricey branded rings to go along with them.

13. That time they talked about a “surprisingly affordable yacht rental service.”

“Years later, older and slightly less compelled by booze, they’ve launched Yachts & Friends, a more grown up, yet still surprisingly affordable yacht rental service. Sailing everywhere from the British Virgin Islands to the Adriatic Sea to Ko Phuket, the concept is simple: You and your friends pick your boat, split the fare, and spend a week aboard.”

In which Goop makes yachting sound as easy as renting a Zipcar.

12. That time they told you that you probably have a parasite and the only way to cure it is to drink nothing but goats’ milk for eight days.

“In my experience, an eight-day, mono-diet goat-milk cleanse — accompanied by a specific vermifuge made of anti-parasitic herbs — is the most successful treatment.”

As if you didn’t already have enough to worry about, Goop loves to give you something else — like saying that you “probably have a parasite” — to add to your anxiety spiral.

11. That time they told you that you also have a full-body yeast infection.

“While we typically think of a vaginal yeast infection when we think of a yeast issue in the body, the signs of a Candida overgrowth can be much subtler and ambiguous — e.g., fatigue, bloating, eczema, dandruff, sugar cravings, a bad memory.”

Surprise! The vague symptoms you’re experiencing are actually for this horrifying-sounding thing that Goop’s telling you about for the first time. Also, don’t forget that you still have that parasite.

9. That time they promoted a sheet of actual stickers as a healing method.

“We’ve been geeking out about the healing power of energy recently — so it’s no surprise that Body Vibes, wearable stickers that rebalance the energy frequency in our bodies, have become a major obsession around goop HQ.

The concept: Human bodies operate at an ideal energetic frequency, but everyday stresses and anxiety can throw off our internal balance, depleting our energy reserves and weakening our immune systems. Body Vibes stickers come pre-programmed to an ideal frequency, allowing them to target imbalances.”

Body Vibes are essentially stickers sold at a 2,000 percent markup. But Goop has effusively promoted them as “Wearable Stickers That Promote Healing (Really!).” Which NASA has confirmed is a scam. (Really!)

8. That time they wrote about a skin-care brand that meditates and chants over their products.

“At first it sounds beyond out-there: beauty company employees earnestly chanting to, praying over, even playing music to … jars of face cream. Or bottles of oil, tubes of cleanser. At Sodashi skincare in Australia, employees meditate with the company’s meticulously crafted skincare as a group together every afternoon. ‘We want to ensure that the energy going into making the product is the best it can be,’ says founder Megan Larsen.”

Goop is a fan of the brand De Mamiel, which espouses some truly unconventional theories. May the image of a bunch of skin-care-company employees meditating over a jar of face cream never leave your mind.

7. That time Gwyneth Paltrow admitted that she’s been stung by bees on purpose.

“I’ve been stung by bees. It’s a thousands of years old treatment called apitherapy. People use it to get rid of inflammation and scarring. It’s actually pretty incredible if you research it. But, man, it’s painful.”

This wasn’t on the site directly, but Paltrow’s quote to the New York Times about getting stung by bees for beauty sums up what Goop’s all about: doing stuff that’s seemingly useless, expensive, and maybe actively harmful in order to be slightly hotter.

6. That time they recommended walking around barefoot to cure depression.

“Earthing therapy rests on the intuitive assumption that connecting to the energy of the planet is healthy for our souls and bodies.”

Goop’s description of how “Earthing” can cure insomnia and depression almost makes you forget that it’s a practice that literally consists of walking around barefoot outdoors.

5. That time they referred to divorce as a “conscious uncoupling.”

“If we can recognize that our partners in our intimate relationships are our teachers, helping us evolve our internal, spiritual support structure, we can avoid the drama of divorce and experience what we call a conscious uncoupling.”

In 2014, Gwyneth Paltrow gave us the euphemism of the decade to describe her divorce from Coldplay’s Chris Martin.

4. That time they recommended steaming your vagina.

“You sit on what is essentially a mini-throne, and a combination of infrared and mugwort steam cleanses your uterus, et al. It is an energetic release — not just a steam douche — that balances female hormone levels. If you’re in LA, you have to do it.”

In terms of word association, when you hear “Goop,” you probably think “vaginal steaming.” And have you ever heard anyone sound more enthusiastic about squatting with your genitals over a steamer during a spa visit?

3. That time they recommended putting a $55 stone in your vagina.

“Made of heart-activating rose quartz — associated with positive energy and love — this yoni egg is associated with the heart chakra. Please be sure to follow the instructions included with your egg.” [Emphasis theirs.]

We’re staying in the same general region for the product description of the notorious jade egg, which, for the uninitiated, is a $55 stone you shove into your hoo-hoo.

2. That time they made crystals sound way more terrifying and powerful than anyone could’ve ever imagined.

“I think of crystals as a timeless database of knowledge, because they retain all the information they have ever been exposed to. Crystals absorb information — whether a severe weather pattern, or the experience of an ancient ceremony — and pass it to anyone that comes into contact with them.”

Goop also sells all eight of the “essential crystals” they recommend as the $85 “Goop Medicine Bag.”

“The summer before last, a mutual friend brought the lovely Katie Lee Joel and her husband William over for dinner. Much to my delight, she brought a fresh batch of these cookies with her.”

At least once a week, I think about how Gwyneth Paltrow referred to Billy Joel as “William” Joel in the description of a cookie recipe and it brings me more peace and joy than 1,000 hours of meditation ever could.